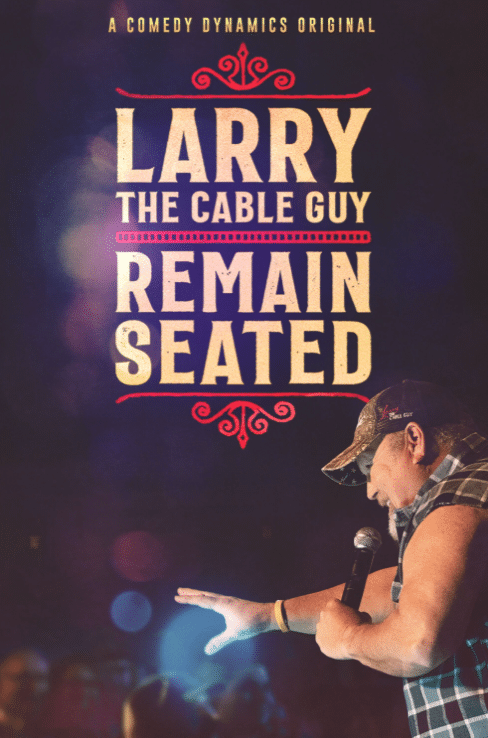 LARRY THE CABLE GUY’S FIRST NEW STAND UP COMEDY SPECIAL IN OVER A DECADE, REMAIN SEATED, TO BE RELEASED BY COMEDY DYNAMICS ON APRIL 7, 2020

Larry the Cable Guy is a multiplatinum recording artist, Grammy nominee, Billboard award winner and one of the top comedians in the country.  He has his own line of merchandise and continues to tour across the United States.  Larry has created The Git-R-Done Foundation, which was named after Larry’s signature catchphrase, and has donated more than 7 million dollars to various charities.  He has a comedy special with Jeff Foxworthy, which is currently available on Netflix. In addition, Larry has his own comedy channel “Jeff and Larry’s Comedy Roundup” on SIRIUSXM.  The channel is a partnership with SIRIUSXM and Jeff Foxworthy.  It showcases the best in great American comedy

“If laughter is the best medicine than 9 outa 10 Dr’s say I’m the prescription you need . And I decided the best way to Git R Done and administer this cure all is to partner with Comedy Dynamics again for my new special, Remain Seated! I can’t wait for y’all to enjoy it!” said Larry the Cable Guy.

“It cured my bunions!” Lydia Gubner

“Working with Larry over the years has truly been an honor. This new special is just another reason why he’s become a staple in American comedy for over a decade.” said Brian Volk-Weiss, CEO of Comedy Dynamics.

The special was directed by Brian Volk-Weiss, who also serves as Executive Producer with Cisco Henson, and Maggie Houlehan.