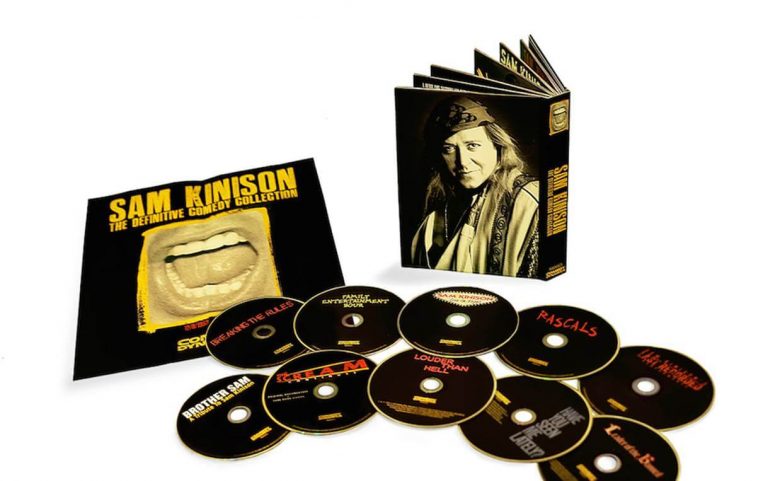 Comedy Dynamics will release The Sam Kinison Definitive Comedy Collection on September 16th.  The box set features a collection of stand-up broadcast specials and albums on three CDs and seven DVDS as well as a limited edition poster.

The new collection compiles the comic’s stand-up films into a single, nearly definitive compendium, both digitally and on DVD. Included in the box set are his breakout 1987 HBO special Breaking the Rules, his rock-star-ready 1991 film Family Entertainment Hour and the posthumously released Live in Las Vegas. It will also include the documentaries Brother Sam (a documentary that aired on the Playboy Channel in 2002) and The Scream Continues (a new documentary with exclusive interview footage with Bill Kinison, home movies, and the unreleased final performance by Sam Kinison just weeks before he died).  The box set includes three audio CDs:  Louder Than Hell, Leader Of The Banned, and Have You Seen Me Lately.

The Grammy-nominated comedian was best known for his trademark scream and raw humor. Rodney Dangerfield gave Kinison his first big break on an HBO comedy showcase in 1985. He went on to write and star in two high-rated HBO stand up specials; Breaking the Rules and Family Entertainment Hour. He also appeared in Rodney Dangerfield: It’s Not Easy Bein’ Me, Saturday Night Live, Married With Children, In Living Color and the feature film Back To School. Along with being voted onto Comedy Central’s All-Time Top 20 Stand-Up Comedians list and VH-1’s Top Comedians list, fellow comedians Robin Williams, Jay Leno, Richard Pryor, Larry King, Howard Stern, Johnny Carson, Tim Matheson, and Tom Lykis, were not shy about singing his praises.  Kinison was killed tragically by a drunk driver at the age of 38.

AUDIO:
Louder Than Hell
Leader Of The Banned
Have You Seen Me Lately

Bill Kinsion, Sam’s brother, manager and the executor of the Kinison estate stated that Sam was absolutely fearless.  “Most people go to the edge and then stop.  Not Sam.  He’d see the edge and then just keep going.  Sam was a white Richard Pryor; a preacher-turned-comedian; a primal screamer who shrieked for our sins.”  Sam was known as the ‘rock-and-roll comic…popularized by his ‘Wild Thing’ music video with Billy Idol, Bon Jovi and other rock legends!”

“Kinison was always one-of-a-kind,” says Brian Volk-Weiss President of Comedy Dynamics. “His energy was wild and maintains the same power to this day.”