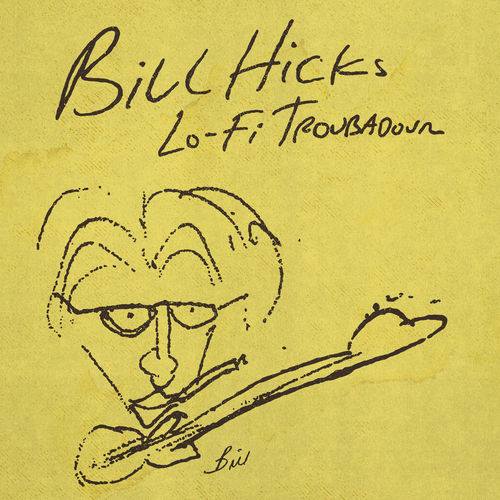 Bill loved music. It was a big part of his life and his comedy. He wrote many songs over the years and often traveled with his guitar while he was on his comedy tours. After shows, in his hotel room, he would play his guitar and write songs. After Bill died his family found boxes of songs Bill had recorded. To honor Bill’s love for music, the tapes were taken to Abbey Road studios in London where they were re-mastered. Lo-Fi Troubadour contains 17 original Bill Hicks’ songs, 6 of those being released for the first time here.

Bill Hicks was an American stand-up comedian. He was considered as one of the masters of dark and observational comedy. Much of his comedy acts involved direct attacks on mainstream society, religion, politics and consumerism. He was the sarcastic and satiric voice of society, which altered people’s perception of events and made them see things from a different angle. After his death, his body of work gained a significant measure of acclaim in creative circles, and he developed a substantial following around the world. He was brutally honest in terms of describing the society. His famous philosophy on life, ‘It’s Just a Ride’, is a perfect reflection of his personality and continues to encourage his fans to live life with immense satisfaction, love and cheerfulness

“Bill will always be best known for his comedy that has touched and inspired so many people but, he also used music as another outlet for his thoughts and his creativity. It’s a different side of Bill that we hope you will enjoy.” – said Steve Hicks

“Bill was an artist in every way possible and Lo-Fi Troubadour is a great example of his creative power and unique view of life.”