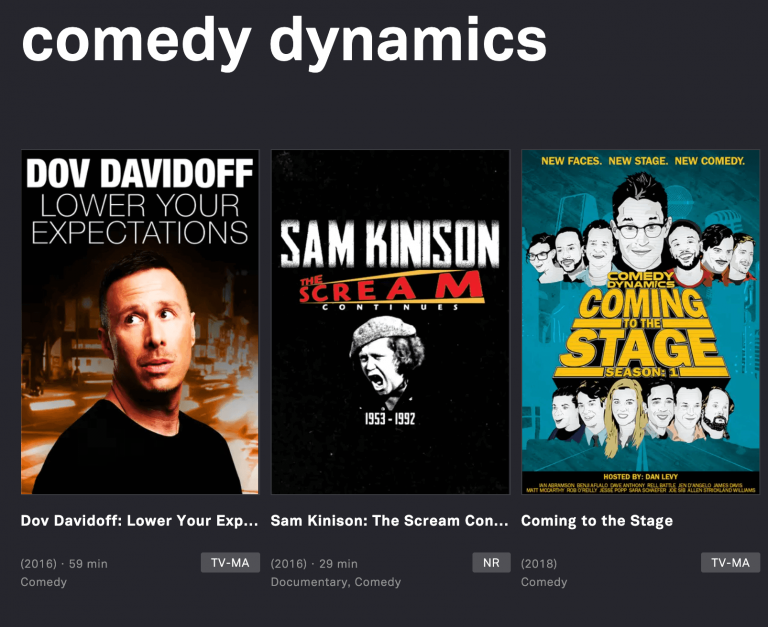 October 4, 2016 – Comedy Dynamics today announced a partnership with Tubi TV to bring over 100 of their titles to the free video-on-demand (VOD) service. Starting today, selections from a wide range of talent will be available on Tubi TV, including specials from Jim Norton, Louie Anderson, Whitney Cummings, Nick DiPaolo, Tim Allen, Bill Hicks and Bob Saget.

“We’re proud to launch with a company that is transforming the face of entertainment and that brings our extensive library to their consumers for huge laughs!” said Brian Volk-Weiss, President and Founder of Comedy Dynamics.

“We’re excited to partner with Comedy Dynamics,” said Thomas Ahn Hicks, Co-founder and Head of Strategy & Business Development for Tubi TV. “Bringing users a wide array of premium content from a variety of genres has always been a high priority for us. With this partnership, our viewers will not only have access to the largest free comedy selection streaming anywhere, they will also be getting world-class stand-up comedians.”

Tubi TV is a free Internet TV network that offers the largest collection of movies and TV shows. Based in San Francisco with a team of passionate entertainment and technology enthusiasts, the company is focused on freeing premium movies and TV shows so viewers can be entertained without having to deal with subscription fees or credit cards. Partnerships with brand advertisers ensure that Tubi TV remains free to all viewers.

Find Tubi TV on Android and iOS mobile devices, and on OTT devices such as Roku, Apple TV, Xbox 360, Xbox One, Samsung, Amazon Fire TV and more. Watch us on Web at http://tubitv.com

Comedy Dynamics is the largest independent stand-up comedy production and distribution company, producing the popular new series on Animal Planet, Animal Nation with Anthony Anderson, History’s Join Or Die with Craig Ferguson, MTV2’s Wild ‘N On Tour, Coming To The Stage, and a new show for MTV with Zac Efron, Spooning with…Zac Efron. The company has worked with a wide-range of established and emerging comedic talent including Kevin Hart, Louis C.K., Aziz Ansari, Jim Gaffigan, Katt Williams and many more. Comedy Dynamics is available on most streaming platforms including: Hulu, Roku, iOS, Amazon, and Android.