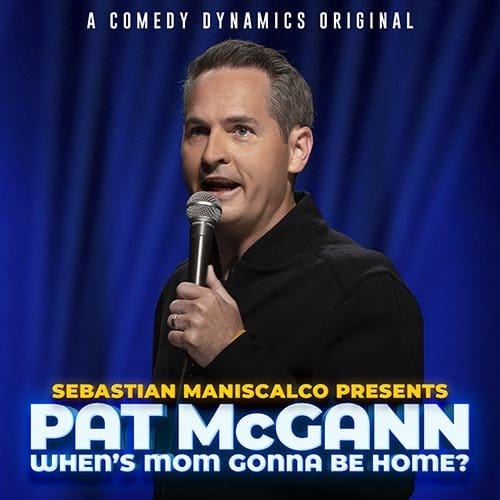 For comedian Pat McGann, the days of getting wrecked at bachelor parties and chasing girls in Mexico are over…but the party’s just starting. Now the pragmatic husband and lovingly indifferent father of three juggles soccer games, trips to the zoo and reluctant dinners with other married couples. In his first comedy special, presented and executive produced by Sebastian Maniscalco, McGann’s sarcastic charm and endearing wit are packed into an hour, loaded with laughs and hilarious quips redefining what it means to be a Family Man.

The special was directed by Brian Volk-Weiss, with Maniscalco, Judi Marmel, Alex Goodman and Cisco Henson serving as Executive Producers.

“Pat has been opening for me for over two years now and I was immediately drawn to his comedy. He’s a Chicago guy like me and a clean comic too,” said Maniscalco. “Some comedians can be intimidated by an opener that goes out and really shines but I love it! He goes out there, kills it and gets the audience going for me. Pat makes me laugh and has from day one. The time was right for his first special and I’m proud to be part of it and share his talent with the world!”

“Every comic dreams of their first special,” shares McGann. “Then when you get it…you question if you are ready for it. To have Sebastian’s support from day one on the road and now with my first special means the world and gave me the confidence that I’m ready. He’s been a believer in me from day one and I’m so thankful for his support. I can’t wait for people to see it!”

“As a husband and father myself, I can relate to a lot of Pat’s special. It’s an honor to be working with Sebastian and Pat on awesome release!” said Brian Volk-Weiss, CEO of Comedy Dynamics.

In 2019, Sebastian Maniscalco the man NBC Nightly News dubbed “comedy’s new superstar” continued reaching heights that few comedians could ever dream about. With a string of record-breaking, sold-out arena shows including the United Center in his hometown of Chicago, Boston’s TD Garden, The Forum in LA and New York’s Madison Square Garden; a new Netflix original special, “Stay Hungry;” hosting the 2019 MTV Video Music Awards; the launch of his brand-new You Bother Me tour (currently on hiatus due to the pandemic); and a starring role alongside Robert DeNiro, Al Pacino, and Joe Pesci in Martin Scorsese’s Oscar-nominated The Irishman, it’s no surprise that Pollstar presented him with 2019’s Comedy Tour of the Year award.

That success follows a number of blockbuster years for the comedian, author and actor the New York Times calls “the hottest comic in America.” that have included releasing a best-selling memoir, Stay Hungry; landing a role in Green Book, which won Best Picture at the Academy Awards and receiving Billboard’s inaugural Comedian of the Year award.  For more information and tour updates visit sebastiancomedy.com.

Pat McGann is quickly rising as one of the sharpest stand-ups in the comedy world.  A relative latecomer to the scene, Pat began stand up at the age of 31 after realizing he was not very good at selling packaging.  He hustled his way to become the house emcee at Zanies Chicago, where he distinguished himself as especially adept at working the crowd. A husband and father of 3 young children, Pat’s appeal stems from his quick wit & relatable take on family life & marriage. In 2017, McGann began touring as the opening act for Sebastian Maniscalco, moving with him from clubs, to theater, and to arenas, including 4 sold out shows at Madison Square Garden. McGann’s relatively short, but impressive resume, includes performances on The Late Show with David Letterman, The Late Show with Stephen Colbert, Montreal’s famed Just For Laughs Festival, Gilda’s LaughFest, The Great American Comedy Festival and the Nashville Comedy Fest. McGann still calls Chicago home.