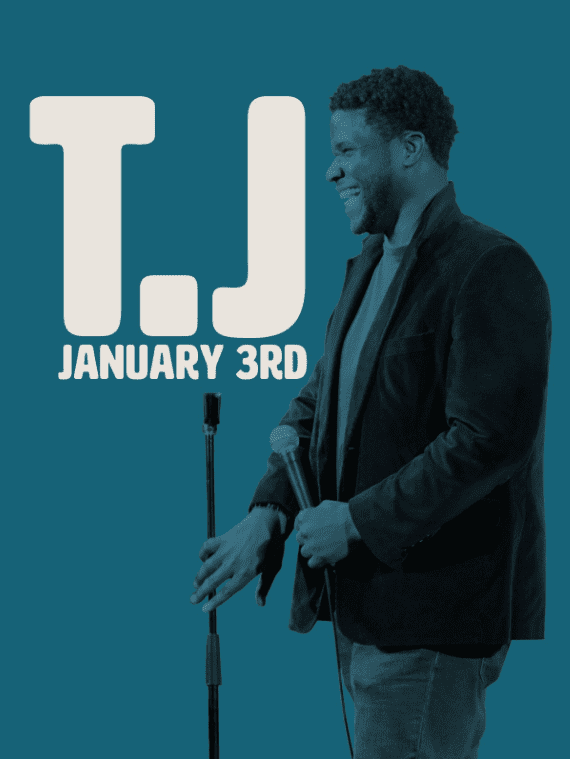 In his debut special taped in Brooklyn, Haitian born stand-up comedian, TJ, tackles with his conversational style the perils of English as a third language, evil children, race, and the #metoo movement. No subject is off limits in this smart, edgy, and, most of all, hilarious debut.

TJ is a standup comedian, writer, actor born and raised in Haiti who currently resides in Brooklyn, NY. He moved to the US in 2008, learned the language, and decided to perform standup in 2012. He’s since made appearances on Gotham Comedy Live on AXS TV, FOX and has written for the New York Times. He’s been featured at SF Sketchfest, the Eugene Mirman Comedy Festival, the Laughing Skull Comedy Festival, and the Boston Comedy Festival.  He performs regularly in the best comedy clubs and alt shows in New York City. TJ has a very laid back, smooth, and conversational style on stage. He jokes about race, society’s idiosyncrasies, and the inherent contrast between life in Haiti and America. Some people say his humor is smart and eye-opening, he would probably agree with these people.

“I’m unbelievably excited about this. When I moved to America in 2008, I barely knew what standup comedy was. It almost immediately became my favorite thing in the world and, in 2012, I decided to pursue it as my dream. It’s simply an honor to be able to call myself a practitioner of this craft among so many talented people who came before me. I love standup comedy more than anything, and I can’t wait to share my first hour with the public.” said T.J.

“TJ is a smart, funny comic with great delivery and an obvious passion for comedy. We’re excited to release his special,” said Brian Volk-Weiss, Founder and CEO of Comedy Dynamics.

Founded by Brian Volk-Weiss, Comedy Dynamics, a Nacelle company, is the largest independent comedy production and distribution company. The company has produced Netflix’s Down to Earth with Zac Efron, The Movies That Made Us, Netflix’s The Toys That Made Us, Behind The Attraction for Disney +, Sony’s Mad About You reboot, Netflix’s Kevin Hart’s Guide to Black History, Jim Gaffigan: Noble Ape, The CW’s Discontinued, All The Way Black for BET+, Animal Planet’s Animal Nation with Anthony Anderson, the scripted comedy on Hulu There’s… Johnny!, History’s Join Or Die with Craig Ferguson, MTV2’s Wild ’N On Tour, Hulu’s Coming To The Stage, and more. Comedy Dynamics began releasing original films in theaters and released the acclaimed independent film Slut in a Good Way in Spring of 2019. In 2017 the Comedy Dynamics Network (CDN) launched and currently distributes specials, television shows and films to all major transactional platforms such as iTunes, Amazon, Google, PlayStation, Xbox and most major telco & satellite providers, including AT&T, Comcast, Charter, Dish, and Verizon.  The company has worked with a wide range of established and emerging comedic talent including Ali Wong, Tiffany Haddish, Kevin Hart, Aziz Ansari, Jim Gaffigan, Pete Davidson, David Cross, and many more. The company was nominated for an NAACP Spirit Award in 2019 for Kevin Hart’s Guide to Black History. 17 Comedy Dynamics releases have been Grammy-nominated (with four wins), including all 5 in the Comedy Album category for the 61st  Annual Grammy Awards in 2019.