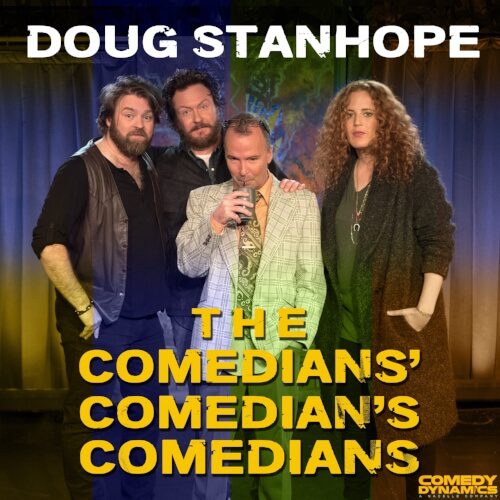 Recorded at Austin, Texas’s South by Southwest, Doug Stanhope hosts a cynical and hilarious night of comedy with fellow comedians Brendon Walsh, Morgan Murphy and Glenn Wool. The special was directed by Brian Hennigan and originally aired on Seeso on June 22, 2017.

Comedians’ Comedian’s Comedians is Stanhope’s 15th comedy album since he began his career in stand-up over 25 years ago. Doug has performed at the Just For Laughs Festival in Montreal, the U.S. Comedy Arts Festival in Aspen, and was named one of the Top Ten Comics to Watch by Variety and the Hollywood Reporter. He has also made numerous television appearances, including a memorable performance on an episode of his friend Louis C.K.’s series Louie. Called “the most important standup working today” by Ricky Gervais and “one of the most bracing live acts on the stand-up circuit” by The Denver Post, Stanhope’s confrontational and vulgar style of comedy has led to him being compared to legends like Richard Pryor, Sam Kinison and Bill Hicks.

Morgan Murphy has recently written for the CBS comedy, 2 Broke Girls and appeared in the films Sleeping Dogs Lie and World’s Greatest Dad. Previously, she performed standup and wrote for  Jimmy Kimmel Live! and on Late Night with Jimmy Fallon, where she was part of the original writing staff and received an Emmy Award nomination for Outstanding Writing. Comedy Dynamics released her critically acclaimed stand up special Irish Goodbye in 2014.

An established star of the comedy circuit, Glenn Wool has performed all over the world. He has appeared on Comedy Central’s Jon Oliver’s New York Stand-Up Show and Jim Norton’s Down and Dirty as well as numerous UK stand-up shows. He won “Best Comedian” at the Sydney comedy Festival in 2010, was nominated for “Best Headliner” by Chortle in 2009 and more. Recently, he was featured on BBC1’s The John Bishop Show, and NBC’s Before The Morning After.