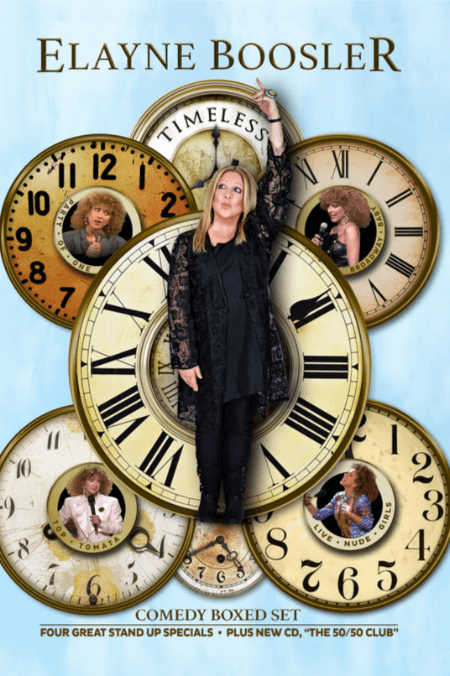 The boxed set, Timeless, will include specials not available since they first aired:Party of One, the special Elayne funded herself in 1986, Broadway Baby (1987),Top Tomata(1989), and Live Nude Girls(1991), each in its own way groundbreaking and funny for all time. As a bonus, Elayne’s new album, The 50/50 Club, recorded live around the country, rounds out the set.

Boosler‘s Party of Oneblew open the locked gates for female standup comedians on TV. She is best known for her thoughtful and feisty socially conscious humor, and love of animals. For over forty years, she has appeared on seemingly every talk show on TV, has written and starred in five of her own one-hour Showtime standup comedy specials, written and directed two movies for Cinemax, and has hosted specials, series, and events. She writes for print media, and founded and runs Tails of Joy animal rescue.

“The political jokes in these specials could have been written today. That’s how slowly things change – great for me, bad for us. If the shoulders on my outfits were only smaller, we could have said these were new,” jokes Elayne.

“It’s an honor to play even a tiny part in the career of an artist who made history as often as Elayne did,” said Brian Volk-Weiss, CEO of Comedy Dynamics.