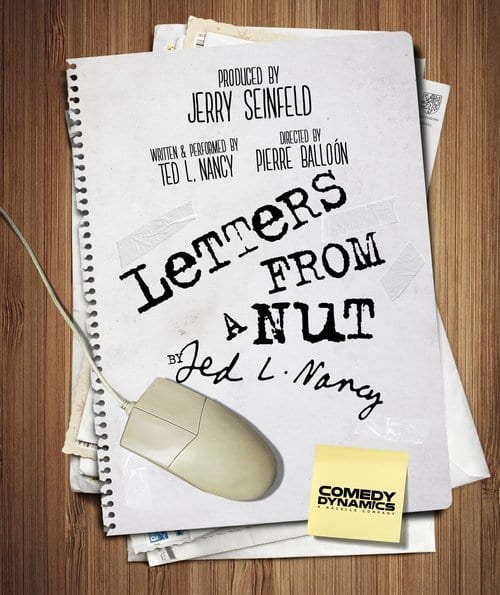 Comedy Dynamics announced today that it has acquired the worldwide digital, streaming and home video rights from Geffen Playhouse for the Jerry Seinfeld produced filmLetters From A Nutwhich is set for an early 2019 release.

Letters From A Nutis a series of best-selling books written by Ted L. Nancy (aka comedian Barry Marder), which consist of prank letters and actual replies from a variety of well-known brands and businesses attempting to satisfy Nancy’s ludicrous requests. The film, directed by Pierre Balloon, was derived from a stage production that premiered at the Geffen Playhouse in Los Angeles starring Beth Kennedy, Barry Marder, and Sam Kwasman. Illustrations by Alan Marder.

Hollywood Reporter described it as “Not quite a play, not quite (a) stand-up act, Letters From a Nut is a fun comic reading with terrific punchlines.”

Variety reflected on some of Letters From A Nut’s memorable moments as “Anearnest request to an Indian casino requesting that he be allowed to sell ham sandwiches in the men’s room…or accusing Ralphs grocery stores of selling him a haunted sponge”.

Pierre Balloón is an innovative, progressive French director. His movie Le Petit (The Small) is a good example of his identifiable filmmaking. Pierre has directed theater, most recently in the West Indies, garnering numerous awards and much acclaim for his production of The Odd Couple, starring Champak Daya (Oscar) and Gunjan Harjeet (Felix). Monsieur Balloón lives with his wife, Paithooon, their two children, Meryle and Roy, and their dog Mushroom. He is the son of Marcel Balloón, a former lighting director, and Babette Peep of the Peep Sisters.

Jerry Seinfeld is a stand-up comedian, actor, writer, producer and director. He is known for playing himself in the sitcom Seinfeld, which he created and wrote with Larry David.As a stand-up comedian, Seinfeld specializes inobservational comedy;in 2005, Comedy Centralnamed Seinfeld the “12th Greatest Stand-up Comedian of All Time.”

Barry Marder is a comedian, former writer on “Seinfeld” and the co-writer of Dreamworks’ animated hit “Bee Movie.” He was a writer for Bill Maher, Jay Leno, & David Letterman. He has performed at most major theaters in the United States as opening act for Jerry Seinfeld. He has also written with George Carlin.

“Letters From A Nutdoes a fantastic job at showcasing how hilarious the corporate environment can be from both the consumer and business perspective.” said Brian Volk-Weiss, CEO of Comedy Dynamics.

This film, produced by Seinfeld, along with Ben Shelton and Josh Shelton, and executive produced by Patricia Kiernan Applegate and Jalem Getz, was negotiated on behalf of Comedy Dynamics by Anna Roberts and Gil Cates, Jr. of the Geffen Playhouse.

Geffen Playhouse has been a hub of the Los Angeles theater scene since opening its doors in 1995. Noted for its intimacy and celebrated for its world-renowned mix of classic and contemporary plays, provocative new works and second productions, the not-for-profit organization continues to present a body of work that has garnered national recognition. Named in honor of entertainment mogul and philanthropist David Geffen, who made the initial donation to the theater, the company was founded by Gilbert Cates and is currently helmed by Executive Director Gil Cates, Jr., Artistic Director Matt Shakman and Board Chair Howard Tenenbaum. Proudly associated with UCLA, the Geffen welcomes an audience of more than 130,000 each year, and maintains extensive education and community engagement programs, designed to involve underserved young people and the community at large in the arts. www.geffenplayhouse.org