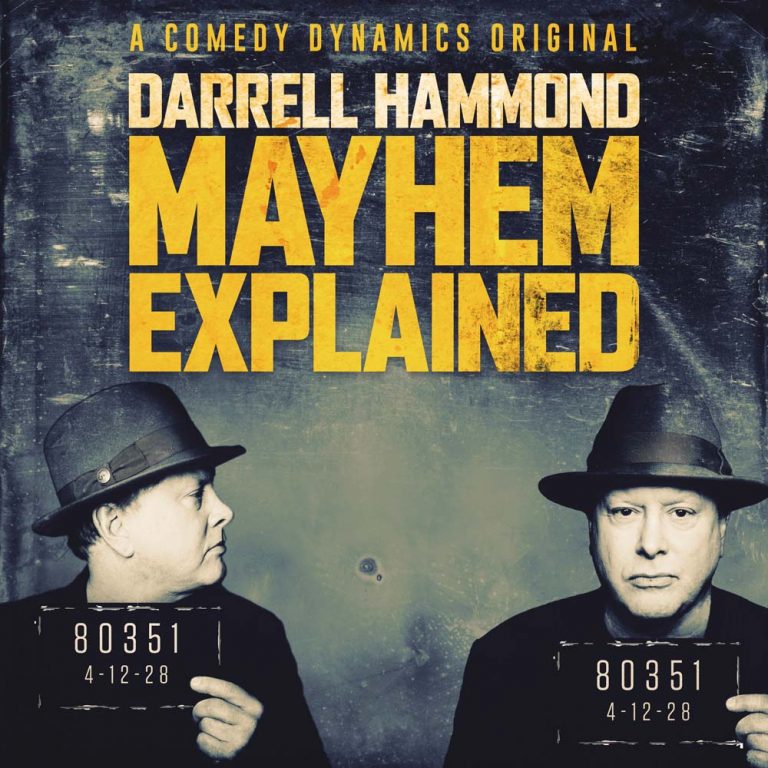 TO BE RELEASED BY COMEDY DYNAMICS OCTOBER 2, 2018

LOS ANGELES, CA–Darrell Hammond’s new comedy special Mayhem Explainedwill be released by Comedy Dynamics on October 2, 2018 premiering on Amazon, Comcast, DirecTV, Cox, DISH, iTunes, Charter, Google Play and many other platforms. The album will be released on October 5, 2018 on all digital and physical audio retailers.

In his newest comedy endeavor, Darrell details sorted yarns from his life, his time at Saturday Night Live, his best-selling book, and other instances of mayhem. The special was taped on November 8th, 2017 at the Palace Theatre in Los Angeles, CA.

“My life felt kind of like The King’s Speech meets Stranger Things – Like I was on Saturday Night Liveand in the upside-down at the same time. That’s a whole lot of mayhem, so I thought I’d explain some of it,” said Darrell Hammond, the comedian, himself.

Darrell Clayton Hammond is an American actor, stand-up comedian and impressionist. He is one of the longest running cast members on Saturday Night Live, and has famously portrayed Presidents Bill Clinton, Ronald Reagan, and George W. Bush, among others. He is the author of the New York Time’s bestseller God, If You’re Not Up There I’m F*cked, which was just released as an audiobook on Audible.com narrated by Darrell, himself. The film Cracked-Up: The Darrell Hammond Story, detailing his life and career is currently finishing production and set for release later this year.

Comedy Dynamics, a Nacelle company, is one of the largest independent comedy production and distribution companies, producing Kevin Hart’s Guide to Black History, Animal Planet’s Animal Nation with Anthony Anderson, the new scripted comedy on Hulu, There’s… Johnny!, History’s Join Or Die with Craig Ferguson, MTV2’s Wild ’N On Tour, and Hulu’s Coming To The Stage. In 2018, Comedy Dynamics began releasing original films in theaters starting with the acclaimed documentary, Poop Talk. The company has worked with a wide range of established and emerging comedic talentincluding Tiffany Haddish, Kevin Hart, Aziz Ansari, Jim Gaffigan, Katt Williams and many more. In total, 12 of Comedy Dynamics’ releases have been Grammy-nominated, with 2 wins.