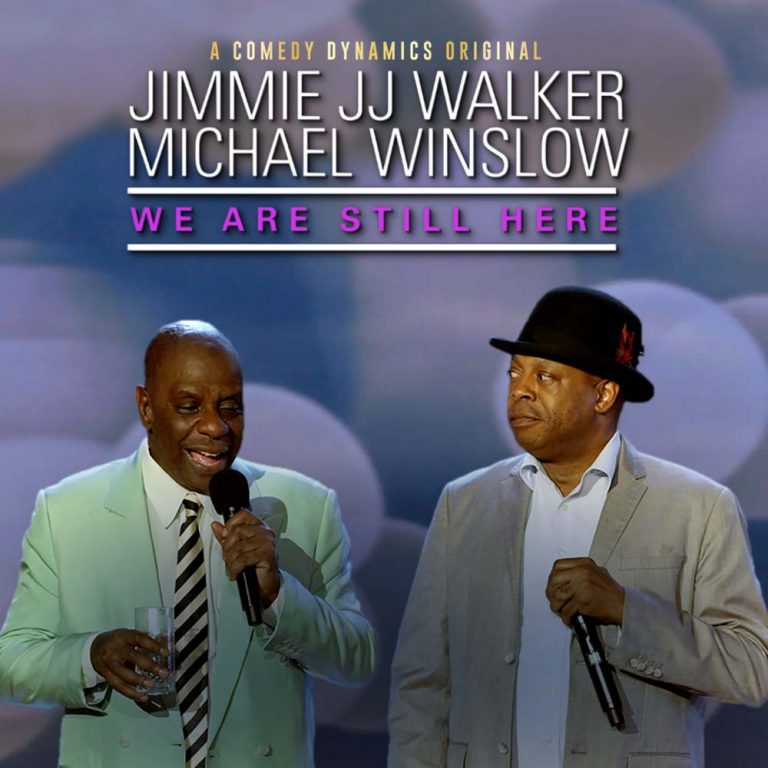 WE ARE STILL HERE

LOS ANGELES, CA– Jimmie JJ Walker & Mike Winslow’s new comedy special We Are Still Here will be released by Comedy Dynamics on August 7, 2018 premiering on Amazon, Comcast, DIRECTV, AT&T, DISH, iTunes, Spectrum, Charter, Google Play and many other platforms. The album will be released on August 10, 2018 on all digital and physical audio retailers.

Jimmie Walker (best known for his role as J.J. Evans on the popular sitcom, Good Times), and Michael Winslow (best known for his role in all seven Police Academy films), perform together in this hilarious one-hour stand up special featuring incredible stories, jokes, and all the wildness one can handle. The special was taped on November 6th, 2017 at the Palace Theatre in Los Angeles, CA.

“The title of the special We’re Still Here really says it all. It’s a good feeling to know audiences are still welcoming me after all these years.  With so many great performers gone to that great big comedy club in the sky, I’m proud to say I survived – I’m still here,” said Jimmie JJ Walker

Rising from the streets of New York’s ghettos to television superstardom, Jimmie Walker personifies the great American success story. His catch phrase “Dyn-o-mite!” is part of the modern vernacular, and he became such a major celebrity in the 1970’s that Time Magazine named him “Comedian of the Decade.”

Michael Leslie Winslow is an American actor, beat boxer, and comedian billed as the “Man of 10,000 Sound Effects” for his ability to make realistic sounds using only his voice. He is best known for his roles in all seven Police Academy films as Larvell Jones. He has also appeared in Spaceballs, Cheech and Chong’s Next Movie, The Love Boat, and commercials for Cadbury and GEICO.

“It’s a great day for America that these two comedy classics were on the same stage on the same day and at the same time. I predict this will be one for the ages. Beep boop Dynamitttttteeee beep!”said Brian Volk-Weiss, CEO of Comedy Dynamics.