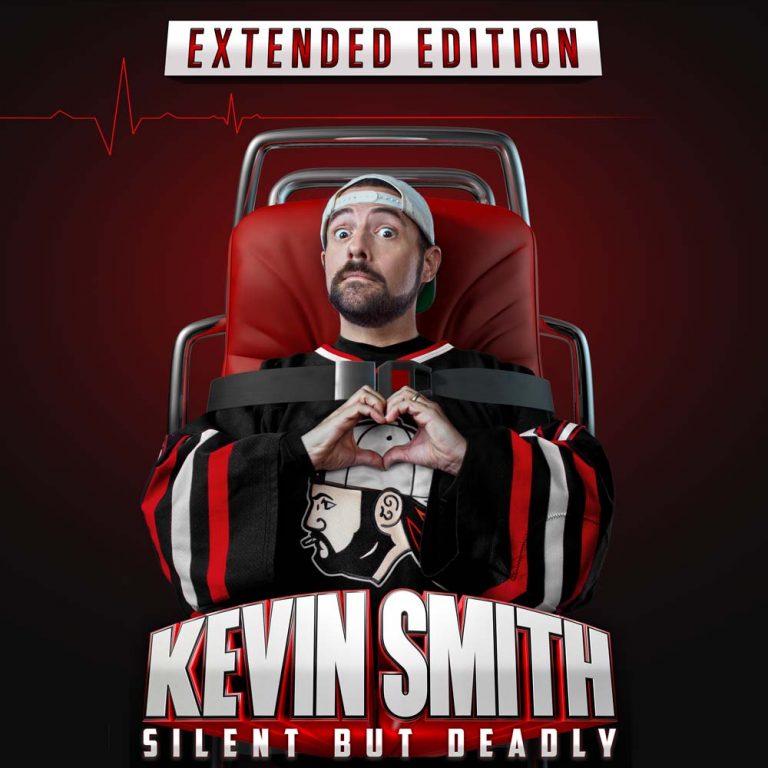 TO BE RELEASED BY COMEDY DYNAMICS NOVEMBER 13, 2018

LOS ANGELES, CA– Kevin Smith’s new comedy special Silent But Deadlywill be released by Comedy Dynamics on November 13, 2018. The special will be available to buy or rent on iTunes, Amazon, Google Play and many other platforms. The album will be released on November 16, 2018 on all digital and physical audio retailers.

Kevin Smith, the filmmaker/podcaster/comedian known for playing the character Silent Bob is anything but quiet in this new comedy special that was recorded an hour before his widely reported massive heart attack in February. But before he nearly died backstage, he killed onstage discussing his marriage, his kid, his friends and his work (or lack thereof). Settle in for an hour of laughs from a man who knows how to tell great and historical stories.

“I’m lucky that Brian and the fine folks at Comedy Dynamics rolled cameras on what was almost the last night of my life. I just wished they’d used the lenses that would’ve made me look thinner. Watch along and take a drink every time you spot symptoms of my impending heart attack!” said Kevin Smith.

Kevin Smith used to be happy, but now he’s a Vegan. He also made Clerks once. Smith is an American filmmaker, actor, comedian, comic book writer, author, podcaster, and is responsible for multiple cult-classic films, such as, Mallrats, Chasing Amy, Dogma, Jay and Silent Bob Strike Back, and Clerks 2 – all of which are set primarily in his home state of New Jersey.

“Only Kevin could shoot an entire comedy special, survive a heart attack, and come back swinging harder than ever!” said Brian Volk-Weiss, CEO of Comedy Dynamics.

Comedy Dynamics, a Nacelle company, is one of the largest independent comedy production and distribution companies, producing Kevin Hart’s Guide to Black History, Animal Planet’s Animal Nation with Anthony Anderson, the new scripted comedy on Hulu, There’s… Johnny!, History’s Join Or Die with Craig Ferguson, MTV2’s Wild ’N On Tour, and Hulu’s Coming To The Stage. In 2018, Comedy Dynamicsbegan releasing original films in theaters starting with the acclaimed documentary, Poop Talk. The company has worked with a wide range of established and emerging comedic talent including Tiffany Haddish, Kevin Hart, Aziz Ansari, Jim Gaffigan, Katt Williams and many more. In total, 12 of Comedy Dynamics’ releases have been Grammy-nominated, with 2 wins.