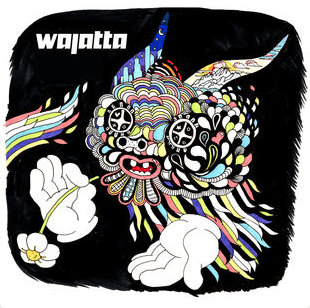 Read more about the group and listen to “Runnin” here.

Wajatta, as the name suggests (a mash-up of Watts and Tejada), represents the collaboration of Reggie Watts and John Tejada’s inherent musical abilities. Having grown up with similar musical influences, the two draw from their love of urban electronic music. Best described as electronic dance, the new music has roots in Detroit techno, Chicago house, ’70s funk and New York hip hop. Tejada’s deep and melodic productions make a perfect backing for Watt’s wide vocal-range and live looping skills.

Watts explains the collaboration, “Having been a longtime fan of John’s I was completely taken aback when we had the opportunity to meet a while back at one of his LA shows. We exchanged information and kept in touch. Eventually we decided to try something in the studio together. I explained that I love to work improvisationally and quickly in the moment. John fortunately has a fast mind and also works in this way so as soon as we started recording it just worked immediately; me being able to just flow what was in my head in response to his music and him locking onto that and crafting something great around/with it.  It’s been such a fun experience brief and yet prolific as the partnership continues. I’m so excited to finally release music that I think will inspire people to move and expand on the dance floor or groove in their headphones. I believe Wajatta is that culminative experience!!”

Tejada also discusses the collaboration, “Reggie and I met at one of my shows last winter and we began work on our collaborations soon after. “Runnin” was a work that was actually started by Reggie live on The Lot Radio Brooklyn.   Reggie gave me access to all his looper files and I added my own synth and drums to it, layered some more Reggie and away we went.”

Reggie Watts is an internationally renowned Musician/Comedian/Writer/Actor who currently stars as the bandleader on CBS’s The Late Late Show with James Corden.Using his formidable voice, looping pedals, and his vast imagination, Watts blends and blurs the lines between music and comedy, wowing audiences with performances that are 100% improvised. Watts’ first Netflix special Spatial released to massive critical acclaim last year, with the New York Times calling it “a giddy rush of escapist nonsense” and dubbing Watts “the most influential absurdist in comedy today.”

As a solo performer, Watts brand of musical/comedy fusion has led to sold out headlining tours in the U.S. and Europe, including mainstream festivals such as Bonnaroo, SXSW, Bumbershoot, Just For Laughs, Pemberton and more. On screen, Reggie recently finished a 70 episode run as the co-host opposite Scott Aukerman on the critically acclaimed IFC variety series, Comedy Bang! Bang! He also co-starred alongside Anna Kendrick, Rebel Wilson and Skylar Astin in Universal Pictures’ musical comedy, Pitch Perfect 2, which has garnered over $279 million at the box office.

John Tejada is a Vienna-born, Los Angeles-based electronic music composer. Tejada’s professional output of music began in 1994 and has never let up, including three albums for the revered label Kompakt, plus releases on Pokerflat, Cocoon, Plug Research, Seventh City, Playhouse, Defected, and his own label of 21 years, Palette Recordings. He has traveled to more than 30 countries DJing and performing live at clubs, festivals and esteemed venues such as Dekmantel Festival (Amsterdam), Mutek (Montreal and Mexico), Sonar Festival (Spain and Tokyo), Berghain (Berlin), Fabric (London), Rex Club (Paris), the Guggenheim Museum Bilbao, the Dorothy Chandler Pavilion and twice at Walt Disney Concert Hall, both in Los Angeles. Also in high demand as a remixer, he has remixed well over 100 songs for the likes of The Postal Service, Bomb the Bass, Télépopmusic, Kevin Saunderson, Way Out West, The Field, Darren Emerson, Gui Boratto, Simian Mobile Disco, and many more.