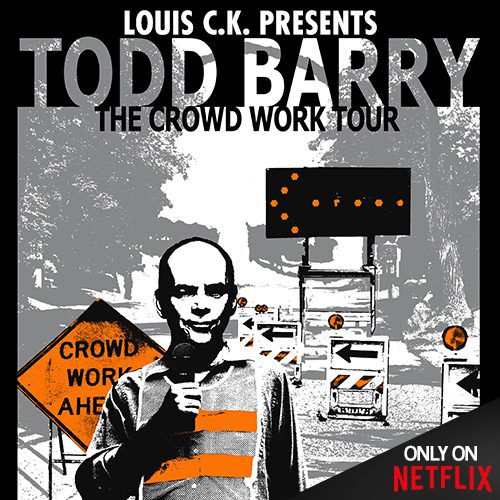 Filmed in seven west coast cities, the special was produced by Louis C.K., and released for purchase on DVD/CD via Louisck.com. This is the first time the special will be available for digital streaming.

In Barry’s fifth stand-up album aptly titled, Crowd Work, he daringly abandons all written material and does an entire tour riffing with the audience. Hilarity ensues as Barry puts his low-key, but quick humor to the ultimate improvisational test.

“It’s an honor to be working with two of the greatest comics of our time,” says Brian Volk-Weiss, President of Comedy Dynamics.

Todd Barry is an actor, writer, and comedian from The Bronx, New York. He has appeared in films including The Wrestler, Road Trip, and Wanderlust. He has also appeared in several television series either as an actor or voice actor. Currently he has a recurring role playing himself on FX’s Louie. In 2014, he was featured on Season 3, of Jerry Seinfeld’s Comedians in Cars Getting Coffee.

Comedian, Louis C.K is the creator, star, writer, director, executive producer and primary editor of the acclaimed FX comedy series Louie. He has won 5 Emmys, the 2012 Peabody Award, as well as numerous awards for The Chris Rock Show and Louie.